Resources for Employers and Candidates 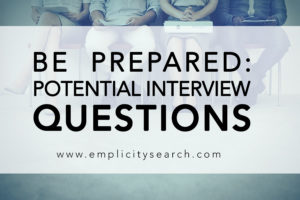 While your resume serves as the tool to get you an interview, you still have to perform above and beyond expectations during the interview to earn your coveted offer letter. Preparation is the key to your success and it is more than just reviewing the company’s Web site and the posted job description. You will need to have carefully planned answers to your hiring manager’s questions.

Interviews are fairly formulaic and will follow the same process. After you introduce yourself and get past the pleasantries, it is show time. Are you really prepared for the questions to come? Could you take any point in your resume and expand upon a situation where-in that was a major factor of your past performance?

We’ve compiled a list of questions that could possibly make an appearance at your upcoming interview. Take a moment to review them and see if you could easily answer each of these. The blanks would be information pertaining to either your background or something relevant to the position.